Ever have those rides where you’re like, well damn, that’s the best that’s ever been? Where you can really look at it and see improvement, know you couldn’t have done that (or at least done it as well) x amount of time ago?

That was this weekend’s lesson. 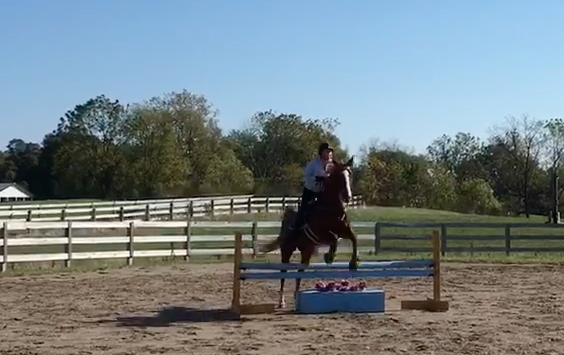 We don’t often get to have courses set in our arena, due to the sharing of it we do with lots of other disciplines, but leading up to our CT next weekend (!!) we get one to school over. It was a total freakin’ blast too.

Was it perfect? Oh absolutely not. Among other things, I:

But, when I think about the fact that I’ve been riding this horse since mid-July and hadn’t jumped a course in 10 years until the last few months?

Nothing felt big or intimidating or scary, which is a fantastic feeling. I have so much trust in this horse, more so than I’ve ever had, except with Lucy, who is basically the exception to all rules ever.

Our first CT course back in August (at crossrails lolllzz) was a little bit of a hot mess – I leaned, he ignored me, we had no half-halt and we kind of just ran around on the forehand over small bumps. We had a rail. At 18″. Due to Doc being like, “Woman. This is THE DUMBEST. NO. I AM NOT PICKING UP MY FEET OVER THAT. It does not deserve my respect.” 4 faults… at crossrails.

But this… two months later (almost to the day actually) and things were so much better. I (sort of) remembered to sit up, we had a half-halt (!), we did not careen around anywhere, I was able to have input and it really felt like, whoa, damn, I’m doing the thing.

In case you like watching starter level courses for some reason?