Turns out it’s REALLY hard to stay motivated to write about riding when you’re… not riding. I finally had surgery on my knee on March 11th. In the end, they reconstructed my ACL, did a partial meniscectomy to my lateral meniscus, a lateral release of the retinaculum to reset my patella and repair/resurfacing of the chondral damage. I was back home the morning after surgery already partially weight bearing and have had a fairly uneventful recovery to date. Within three days I was in full on cabin fever and demanding someone drive me to the barn to see my horse and by day 8 I ditched the crutches I was supposed to be on another 6 days. I have lots of theories why I was able to bounce back relatively quickly, but I won’t bore anyone (unless you’re also finding yourself in this situation and in that case… happy to share any advice).

Most importantly, at week 6 I was cleared to sit on Archie and do some light walking around and at week 8 I was cleared to do flatwork, about 20 minutes at a time, building up frequency. It feels so amazing to be back on a horse, especially my horse. There’s something so comfortable about sitting on one you know so well – like putting on your favorite pair of broken in shoes. Walking was completely uneventful, so I quickly decided to add in some trot work and found myself having a rude awakening.

Back in 2018, when I broke my back, once I was cleared I was back on and other than being out of shape, was able to jump right back into riding. Granted, I was only off for three months give or take as opposed to five here, but I naively assumed this would be much of the same. Let me tell you: it is not.

Quickly I’ve realized I feel like a lopsided bowl of jello – not only is my left leg weak, but it’s also… less responsive? The tiny minute adjustments we make almost subconsciously – add a little inside calf here to push them into an outside rein, a little bump to move haunches over, a quick pulse to extend a gait – are nearly impossible. My balance is a mess and that doesn’t begin to touch on my overall weakness in my body/core. Thank god for neck straps and ponies who are more interested in stopping than losing their rider.

Over the last few weeks it’s all getting easier though and I had my first jump lessons back this past week. I can’t say enough good things about Archie – the six months I was off and he was being catch ridden by friends and barnmates gave him this newfound confidence that I’ve never felt before.

My trainer even looked at my at the start of my jump lesson and said, “this is not the same horse you had six months ago” and it’s completely (ish) true. He’s still the safe, goofy, opinionated Archie I adore, but he’s also more forward, hunts the fences, goes with far less rider input (or what he’d call ‘interference’) and most amazingly… now takes the long spot?

I feel better than I would have guessed, in part because I know Archie so well that it’s like slipping on a pair of favorite shoes when I sit on him.

The hardest parts right now are the fact that I can’t get comfortable in a true jump length stirrup (and definitely not a XC length), so it’s a trade off between knee doesn’t hurt with longer, but leg less stable and swings and how much discomfort I want to ride through. I’m stuck on that one, to the point I may just haul my entire saddle into PT this week and see if they have any ideas.

Showing is still very much up in the air – I think it’s more of a possibility, but I don’t want to spend the money and time unless I know I can give my horse the ride he needs and deserves. That being said, I think there’s a lot of benefit in just getting out and doing the damn thing so we’ll see. 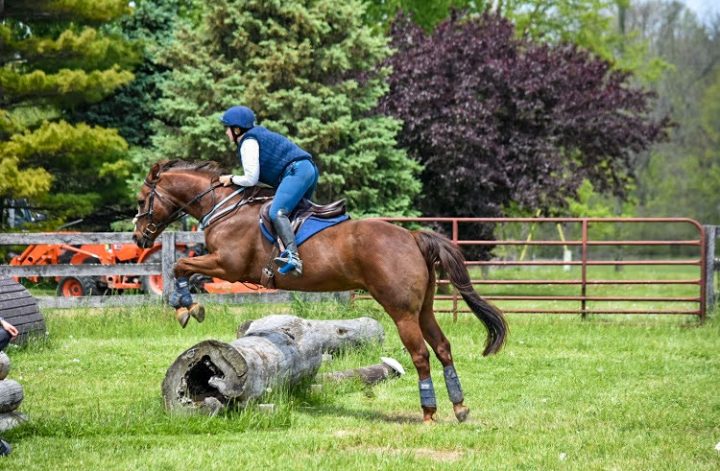