And we’ve made it to the final day of event camp, excuse me while I go cry for a minute over here and miss it.

On our last day, we were allowed to choose what kind of lesson we wanted. For me, this was a no brainer – we wanted to go XC again. Stephen left after day two, so our final lesson ended up with Leslie Law. Bookend lessons with him, how perfect for the week.

We were back on our 8am ride time, which I was perfectly fine with considering we had to pack up and be done that afternoon and it was going to be the hottest day of the week so far. My group this day was one of the girls and horses I’d ridden with all week, plus two juniors who I hadn’t (and damn, those girls were brave!)

Leslie’s big on doing jumps strung together versus schooling anything individually on XC because that’s how we ride it. We warmed up initially over a log and then proceeded to immediately go jump log to blue rolltop. Where Doc decided that left drift we love so much was back and strong. So that’s how today was going to go. 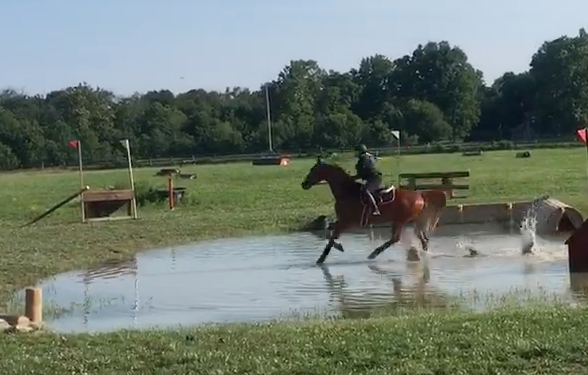 And for whatever reason, I decided that the appropriate way to enter the water was to ride like a monkey, lean forward, drop all contact and do nothing. Thank God my horse is a saint and was like, um, okay mom, I don’t know why you’re so dumb, but I can do this in my sleep.

Off we went to the other field, my poor saintly horse and his monkey rider.

Where we successfully jumped through the entire sunken road! Which I have no photos or video of so just use your imagination!

Coming off the sunken road, we came down and then back up a hill to a small grey house and then around to a rolltop. Well, down the hill Doc’s (as Leslie phrased it) brain left for another planet. He decided I was no longer necessary, he was a fast Saddlebred, he was galloping and he did not need a Captain.

This earned him about fifteen canter-halt-canter-halt transitions up and down this hill until Leslie was satisfied we had brakes once again. And from there, we were great – over the house to the rolltop which had a slight drop on landing.

At this point we had some discussion – Leslie gave us each some galloping tips (which I will be working on for sure) and position tips (I bring my heel up to use it and I pinch with my knee).

Some of our group hadn’t jumped the half coffin at all, so he had us back over there and over it. After two successful trips over each way, our group was calling it a day, but I had one more request. As the truest testament to my bravery this week – I said the rest of my group got to jump the full coffin on Tuesday, but I had chickened out. Well, I wanted to end my week doing it. 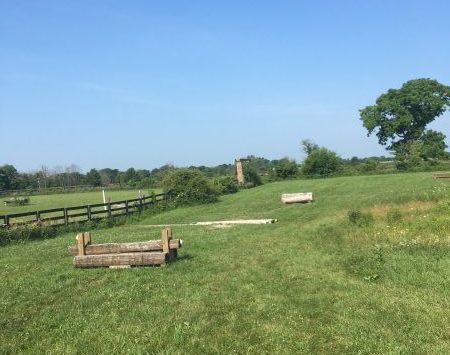 And I haven’t stopped smiling since.

Seriously, the best week ever.