Some people are really good about writing recaps of things while they are happening. I am not one of them. Each night after camp, I came home, made an effort to play with the dog, showered, scavenged for food and fell into a coma. Repeat. So, you get day two’s recap four days later.

We had a bright and early ride time of 8am on Tuesday morning, which I did not love when my alarm went off at 5:45, but did love when it wasn’t 90324 bazillion degrees outside. My group went XC with Stephen Bradley this morning, something I was nervously excited for. The extent of my XC schooling on Doc to this point has been the logs in one of our back fields, where he decided to become a cutting horse around a tree and I yelled a lot of four letter words. After our gridwork lesson the day before though, I was feeling comfortable with some height. 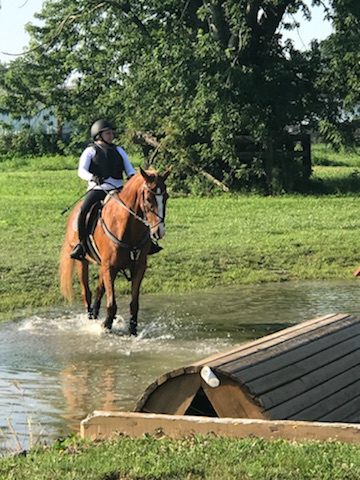 Stephen immediately shortened my stirrups another two holes (um, ouch) and sent us out to go warm up around the field. To which Doc said, “yeah, nahhhh” and stood there not moving. Have I mentioned this is our latest trick? Not moving no matter what I do, including kicking, clucking, tapping with crop, tapping harder with crop, pulling head around, backing up, setting off dynamite, doing gymnastics, blasting an airhorn… Super awesome. Stephen had me pull his head around while tapping his hind end to get his feet moving in the tiniest circle of all time, gradually adding to it and changing directions constantly. While minorly mortifiying, I was actually really happy this happened so I could get some input on it.

Doc finally seemed to realize we were doing XC and oh, he loves the jumpies and oh, okay he could go now and off we went. We started out over a small Starter/Intro level set of steps, around to a small rolltop, back over a set of BN steps.

Immediately, it was a confidence builder. It all just clicked – my horse knows his job, he’s going to take care of me, I can do this, we got it. It helped Stephen was so so encouraging. The entire lesson, he wasn’t afraid to help correct things, but was quick to praise a good ride and when things went well.

Eventually, we cruised around jumping all kinds of things – essentially the entire BN course (out of order) at this farm.

We went splashing through the water, where Doc decided it was his own personal waterpark.

Eventually we headed to the second field to school the ditch back there. Doc, per schoolmaster status, was basically like, yeah, k, ditch cool. I had slightly more issues getting my shit together. But we did. This ditch is actually set up as part of a full coffin, but we started out schooling it by itself. Then we added in the rails on one end, back and forth.

As we started to head down to it, Doc finally woke up, realized where he was and decided he wanted to go Mach 10 for this half-coffin. Um, no.

In my previous riding life, this would have had me off my horse. Walking back the barn. Opting out of jumping. In this life? I laughed at him, growled and told him (what I thought was quietly), “DAMNIT I AM THE CAPTAIN NOW.”

And then you know what we did? I sat up, put my leg on and rode the shit out of that thing. And I was damn proud of myself for it.

Little did I know, what I thought was my quiet rev-up was not-so-quiet and had been heard by a number of observers. Which is how, on day 2 of event camp, I became known as Captain.

Tuesday afternoon brought a stadium lesson with Sharon White (seriously even writing this all out is like pinch me, did that really happen?!). All the other trainers made fun of her/us because she warms you up on the flat for what feels like 2823 years. But damn if it wasn’t worth it – every horse in our group was sharp off our aids after that. So many transitions. Short, mini ones – three steps of walk, back to trot. Three steps of trot, back to canter. I can sum up my entire flatwork lesson as, “Open your hip flexors, relax your elbows.” We got lots of good first toolkit stuff. From there, we moved to two ground poles. Her entirely philosophy – jumping is just ground poles with height. If you can do it there, you can do it over height. Guess what? It works.

We did those two, eventually adding in a single vertical and then an outside line. Circle at the end, back down the line, over the poles, circle. Added it into a full course (we’ll see if I can remember it) – outside line, vertical to vertical bending line, oxer across the middle, vertical to oxer bending line. The trick was we added a circle after every line. The idea being the circle gave us the time to get reorganized, breathe, get the canter we wanted, and rebalance. Eventually we took out the circles and actually added in a second oxer off the middle oxer on another bending line (originally we had circled around it). It was amazing the feeling we had – it was actually easier to make the bending line than it had been to circle. The feeling of using the circles in between stayed and being able to take our time and get the canter we wanted.

I walked out of that lesson about ready to keel over and die (she will work you!) but also feeling like a million bucks. Had I just rode my horse around an entire 2’9″-2’11” course without feeling a hint of nerves? Hell yeah I had. Suddenly courses didn’t just go by in a blur of cantercantercanter jump don’t die cantercanter turn jump and instead I had the time to think and proactively make decisions and ask for what I wanted.

And I can’t state it enough but Sharon is freaking amazing and positive and encouraging and hard as hell on you in the absolute best way and I can’t wait to ride with her again.