The day didn’t even start at the crack of dawn thanks to a 10:27am ride time, so it should have been a good omen. I got to wear my sparkly white Animos for the first time! These were good things!

I made sure to get on with plenty of time to warm up, knowing he likes a longgggg walk before being asked to do anything these days. We did just that, then added in some long and low trots before moving into the warm up arena for Trainer K to finish help putting it together. I started to pick him up and push him forward and he responded well, adding in some canter transitions upward. The last few weeks have been a total breakthrough in our canter work – I’ve had some fantastic lessons where it finally (a year and a half later) feels like I can influence it in a positive way, as opposed to being an unbalanced lump on his back. He was feeling amazing and when we came back down to trot, it was even better, having now really warmed up. I had just enough time to let him walk a few laps and then it was time to go.

It started out with such promise.

The beginning felt good – he tried to get a little wriggly on the centerline, but we stayed straight and the scores/comments reflected both of those. A 7.5? I’ll take it. Nothing was perfect, but we were solidly in the 6.5s range, which is basically where I am right now. This winter is going to be dressage boot camp.

And then came the second canter circle. Beginner Novice B has you trot a half circle before picking up the canter on the circle – sounds great, right? I was feeling good, we had this. Well, I went to ask for the canter and felt him suck back behind my leg. Instead of taking a deep breath and adding some extra leg and keeping him bent, I panicked, saw E straight ahead and tapped him with my whip (literally barely a tap). Which earned me a sassy kick/mini buck and One Pissed Off Doc. Who was now on the wrong lead. I was flustered from All That, so it took me three or so strides to fix it and then it was basically time to trot. Well, now Doc was like, “Yeah RIGHT lady, you had the audacity to touch me with your crop to canter so now I will ONLY CANTER FOREVER.” Thx. Got dat 4.0. 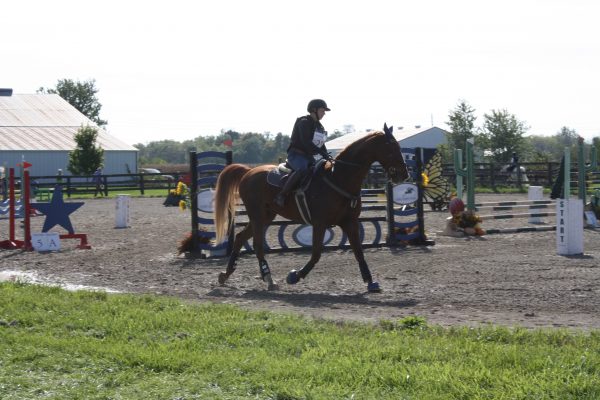 Late to trot. Late to walk. Judge literally CIRCLED the movements on the test. Like, I am aware I was late, I was just trying to STOP CANTERING. Medium walk became more of a ‘wrestle-with-giraffe-in-corner’, to the free walk where I went, “Oh dear God, please just take this moment to RELAX.” At least that was a 6.0, a small flicker of light in a dark dressage world. Back to medium walk, with my Angry Llama who I am not helping with my tense ‘well fuck’ body language. Our trot transition earned the remark of, “prompt” which just makes me laugh because uh, yeah, he was ready to get the hell out of there so going faster was not a problem. It was also “hollow and counterbent” but really, not the biggest problem here now.

We pulled out a 6.5 for coming down the centerline at least and a final 6.0 because someone halted square. Needless to say, when the 6.5s are the HIGH points in your test, you’re not exactly going to be like top of the class. No worries, we weren’t. A 40.5? No, that is not the dressage court speed limit or the number of times this weekend I was told to bend my elbows. Yes, it is unfortunately our dressage score. It’s never good when your score is closer to ‘midlife crisis’ than ‘legal drinking age’.

But! It was over and it was time to jump the jompies and we like doing that more anyways.

How to go to a horse show