After a… less than desirable dressage test, I untacked and let Doc chill in his stall for a bit while I walked over to watch the Training riders ride SJ. The trainer I was working with this weekend (Trainer C was out of town) and her daughter (who is like 12 and a better rider than I will ever hope to be) both had horses in the Training division I wanted to see go and I wanted to see how the course was riding.

I don’t have a photo of the course, but it was bending line 1 to 2, left rollback to a vertical at 3, 5 strides to an oxer, right to 5 on the outside, around the end to a tight bending line from 6 to 7, left to a two stride on the outside set as 8A and B. The first four jumps were the same as the derby course we rode the day before, so I felt good about them. The rest of the course seemed to be riding well, save one exception – that line from 6 to 7.

In watching the Training riders go, I watched multiple people have misses or near misses at 7. No problem, I figured, my jumps are a lot smaller, I’ll just really ride for 7. Famous last words.

I got him tacked up and we got warmed up – popped over the jumps in warmup a few times until I had a great one at the oxer and we went on that. He felt really good as we got into the arena and the bell rang and I was feeling great about the course.

The first four went beautifully – the distances were just coming up perfectly, he was in front of my leg and responsive, I remembered not to pull and things felt great. Down five felt good, he started to get a little tuned out, but having two corners at the end gave me exactly what I needed to get him back and set up for 6. So I thought.

We went to head for 6-7 and I got so damn focused on Not Missing 7, that… we missed 6. Yup. Just completely went right of it. I can’t blame it as a runout or a refusal, literally my horse was going where I was aiming him. That just happened to be… at the standard.

Circled around, actually like, remembered to ride 6 and keep my outside leg on and whatcha know, it worked and the line rode great, as did the last combo at 8.

Even with that dumb rider error, it was EASILY our best SJ round to date. We ended up with 9 time penalties so I think we would have been close to double clear if not for my dumb miss. I can’t be too mad though because it was just a fantastic round otherwise. Every jump just came up and felt perfect. It was like the culmination of everything we worked on all summer and fall and camp and everything else. In other words, it was the perfect setup to go XC off of because I finally felt the nerves settle and realized that we could totally do this. 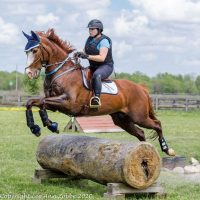 and on day 391 holly’s dad found out she bought

a year ago this little sassy thing showed up in in

archie got to help our friend @abigailbenz out wit

archie may request someone muzzle his mom before t

#thepartypony and i had a blast cruising around re

had our last jump school before revel run this wee

event camp was last week and while i have so much

hands on my knees (neck), shakin' ass, on my thot