Friday afternoon the sun shined and it was 60 degrees and it was GLORIOUS. Like, Vitamin D, yes please and ponies and seriously, I don’t think I realized how grumpy I’d been until suddenly I was seriously giddy happy. Sunshine, it’s a good thing. The arena footing was still a little more wet than I would have liked so we stuck to walk and trot work, but it’s not like we have any shortage of things to work on at those gaits. 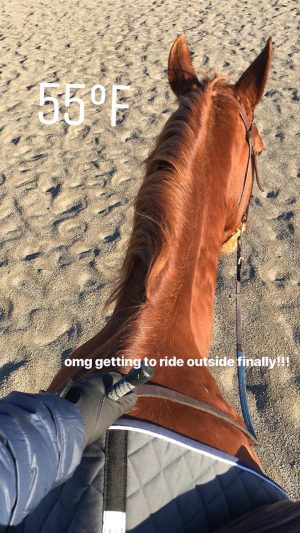 I’m bad about my flatwork rides being the same old walk/trot/canter both directions so I spent some time on Friday morning reading up on ideas and other things to do and it paid off. I really focused on doing something every eight strides or so, trying not to go any length of the arena without doing something – transitions, shoulder-in, circles, leg yield, sitting trot, collecting/lengthening. It was awesome to feel the change. What started as a ride where Doc was behind my leg and pulled his nice ‘ears-pinned, kick at leg’ every time I asked for more turned into one of my favorite flat rides I’ve had on him.

By halfway through the ride, he was moving off my leg so nicely, working in a frame, really in the bridle in a way we struggle to get to. It wasn’t necessarily 100% consistent because #workinprogress, but it was a definite improvement over a lot of our rides this winter. The best part was the horse who refused to trot and only acquiesced with a sloth, legs dragging jog early on was light as could be off my aids and giving me awesome transitions. Definitely telling that I need to be doing more during my rides as opposed to just going around and around.

Saturday morning was my usual lesson, although we were back in the indoor thanks to rain. Ugh. Still, I’ll take rain over snow and ice any day. Not quite as good of a warmup as yesterday, but neither of us likes riding indoors as much.

We worked on an exercise we also did last week with four poles/cavaletti. 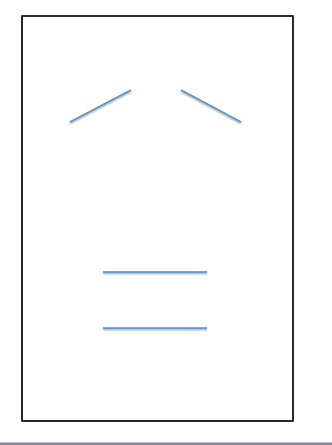 To start, we rode through the bounce, picked a direction and went over both end poles in a sort of moon shape, and back out over the bounce. My biggest issues here are sitting up and keeping my collarbone up, surprise surprise. Once we got that done, we added a circle over the two end poles. I needed a lot more collection to get that done which is something that’s an ongoing work in progress too.

The last way we rode it was (is?) the most challenging for me: bounce, right pole, left pole, inside turn towards the wall, back over the right pole, left, out over the bounce. Theoretically, not awful. And most of it was fine, since we’d already ridden it two other ways. Until we added the inside turn.

An inside turn towards the rail in the outdoor? Fine. Don’t love it, but I can do it. Add an arena wall? Mental roadblock times 1000. Even though I know we’re capable of making the turn, I zero in on the wall, stare at it and convince myself we’re going to just, I don’t know, run into it? Crash and die? Looking past the wall and focusing on where we’re going helps, but there’s still that moment I see the wall as we start the turn and I lose my marbles.

I know it’s 100% mental because I managed to get it done today. It wasn’t pretty, but I sat up and wheeled that horse around like we were in a reining pattern and it felt good to end on a positive note.

That all being said, it definitely pointed out a mental weakness I need to work on. I’ve gotten over a lot of my fears and insecurities this last year, so it feels interesting to discover a new one, so to speak.

In which water takes a defining role