We left off at a high of 36 degrees and a very pissed off dog who promptly went back to bed as I left. I actually entered two consecutive divisions; our local farm that runs these shows makes it super affordable to do two and if we’re already there… why not?

My dressage ride times were 9:15 (Starter) and 11:10 (BN), so we were tacked up and walking by 8:30 aka my hands were already goners by like 8:38. Aside from Doc feeling very appalled that he was not allowed to graze during our walk, things felt pretty good. As much as I could feel anything, that is. Starter rode BN Test A and BN rode BN B, so I was mainly focused on remembering to turn the correct way at C.

And success! At least of the ‘not forgetting my test’ sort. Still didn’t really get that whole ‘connection’ thing going and my circles were all more of the 15m oval variety than the 20m asked for, but improvement is improvement and we managed a 36.3, which is our best score to date.

Second test, I went in with the instruction to stop, “trying to ride pretty” and to actively ride. What a thought, right? Turns out it even works. We even had moments where we did real dressaging. Miracles, I tell you. The best part? An even better score of 35.5. 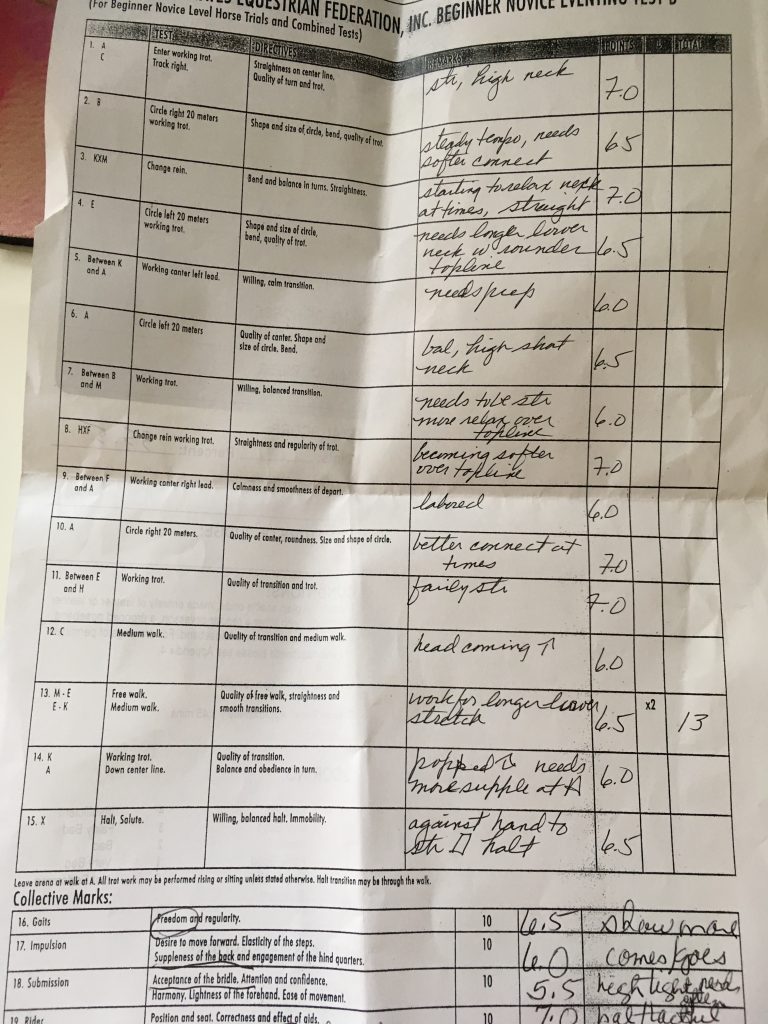 By this point, I was only semi-frozen as we’d hit a heat wave of 28, making it downright balmy out. Just in time to go jump.

My first round was actually one of the best rounds I’ve ridden to date – things felt really, really good, which is always the best feeling. Minus the small place where I, um, got lost going to 8, nearly rode past it and had to trot it like a snail to get there from the weirdest distance ever. This course also featured the sailboat jump, the site of our first rail at 18″. We got kind of a weird distance to it here and we’re now just convinced Doc thinks the entire jump is stupid and not worth his time, because he made sure to give it a nice whack for good measure (it stayed up). Seriously, we have a sailboat jump vendetta.

Second round was my BN round, the same course except 5 was now an AB combo. Not nearly as pretty of a course, but we were instructed to get a good distance to the damn sailboats, and we did. Maybe at the expense of um, everything else? But we did!

We pulled the rail at 3 because I can’t ride and basically made my horse jump from underneath it like the fantastic rider I am and then I got lost to 6 because I’m an amateur who can’t remember things and all my brain cells were frozen by this point.

The best part of all this? In August we showed at this same series and I remember looking at the Starter course and thinking they all looked big. Three months (almost to the day!), I went out and didn’t think a single jump on the BN course felt big. That when Trainer C asked what I thought of the Novice course, I was able to say it looked… not that big. Crazy stuff, right there.

It’s amazing that I started riding this horse four months ago. Four months ago, I hadn’t jumped a course in 10 years. I said that Starter looked big. And this weekend?

We came in 2nd in our first BN CT. Sure, it’s just a CT, we still have an entire phase to add next year (2018, we’re coming!), but I’m pretty damn proud of that. I also feel very proud of surviving (maybe even thriving a little bit?!) a horse show in literal freezing temperatures. It might even feel like a greater accomplishment, but I’m not admitting that publicly.